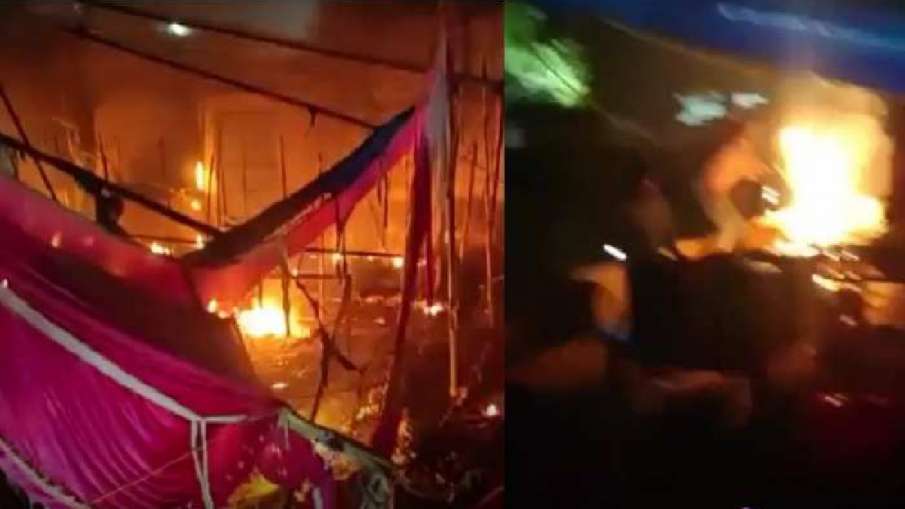 A 10-year-old girl was also among the dead. As soon as the fire broke out, a large number of villagers also reached for help. More than 50 ambulances were set up to take the injured to the hospital.

Uttar Pradesh: A fire broke out at a Durga Puja pandal in Aurai Kotwali area of ​​Bhadohi district of Uttar Pradesh on Sunday night. The incident happened when worship was going on in the pandal there. More than 300 people were present there at the time of the incident. 5 people died in this accident. It is being told that 3 of the 5 dead are from the same family. Apart from this, a 10-year-old girl is also among the dead. While more than 60 people have been badly burnt due to the fire.

37 injured were referred to Varanasi

According to media reports, women and children are more among those injured in the fire. They were admitted to CHC and private hospitals. From here 37 people were referred to Varanasi. Of these, the condition of 20 is critical. DM-SP and other officers and fire brigade reached the spot as soon as the accident was reported. According to the DM, it is feared that the fire has started due to short circuit. As soon as the fire broke out, a large number of villagers also reached for help. More than 50 ambulances were deployed to take the injured to the hospital.

At the same time, after this terrible fire, the police has also started its action. Police have registered a case against Bachha Yadav, president of Durga Puja Organizing Committee. Several other unidentified members of the committee have also been booked. According to the police, during the preliminary investigation, the negligence of the organizing committee in the arrangements has come to the fore. After which a case has been registered against the organizers in Aurai Kotwali.

Entire pandal burnt due to fire, no damage to statues

It is worth noting that yesterday was the Saptami Puja of Navratri on Sunday and people had gone to the pandal to have darshan of Goddess Durga. Due to the fire, the entire pandal got burnt down and everything kept there got burnt. However, there was no damage to the statues. Like every year, this year too a puja pandal was set up at Pokhara (pond) near the Shiva temple in Narthua village. The puja pandal was made cave-like with paper and thermocol. According to eyewitnesses, a large number of devotees were performing aarti at the Durga Puja pandal.

There was talk of help in the middle of the war, Biden lost his cool on the phone call from Zelensky

This special trick of investing in mutual funds can make you a millionaire, know how